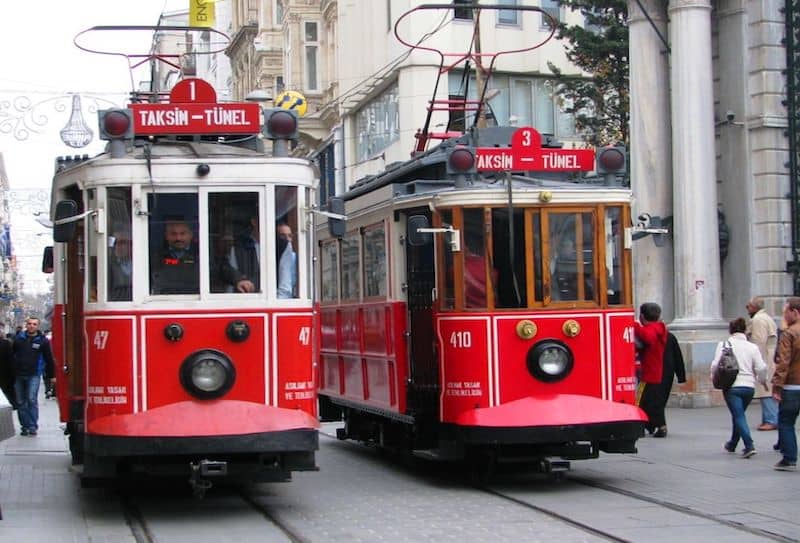 Istanbul Airport To The City Center (Sultanahmet or Taksim)

Istanbul, the largest city in Turkey, is experiencing ongoing demand as a tourist destination for visitors from around the world. The vast majority of tourists who plan on visiting the city will arrive via New Istanbul Airport, the main international airport in the area. Also known by its International Air Transport Association code of IST, this facility is about 33 miles (roughly 54 kilometers) from the center of Istanbul with various transportation options available.

The methods for getting from the airport into the city include using a taxi, taking a bus, or renting a car. A bus will take the most amount of time and have the least luggage and seating space, whereas a taxi or a rental car will be more private and give you a direct, faster journey but they will both cost more. Thankfully, there are enough options to choose from to find the right one.

Deciding on the best choice for your trip will depend on your individual wants and needs. If you are traveling on your own and would like a ride with privacy, a taxi or renting a car will be the ideal approach. Alternatively, if you are looking for the most cost-effective option then you should consider taking the bus because it will be cheaper than a taxi or using a rental car.

Taking a bus from the airport to the city center

A number of bus operators offer routes from the airport to various parts of Istanbul, including BURULAŞ-BBBUS, HAVAİST, HAVALINES, İETT and Istanbul Seyahat. You can find the airport pickup stops by following the signs for buses or asking an airport staffer for directions. The bus station is located on the floor designated as “-2” in the main terminal building.

More than 150 individual buses run every day taking passengers into and near Istanbul, with journeys departing at least every 30 minutes or faster, though some might be more spaced out. Each bus company makes their routes and schedules available online, so you should be able to find one that has a time and map that works best for getting you to your destination in the city.

The journey could take anywhere from 30 minutes to more than 1 hour, and it will depend on the location of the stop at which you intend to get off the bus. Naturally, the closer that your final destination is to the airport, the shorter that the journey time will be compared to other stops.

There are some potential downsides of taking a bus, depending on your individual needs. For example, the bus journey can take a very long time compared to a taxi or rental car as it makes multiple stops along the way. And the final stop on the bus route could still be a long walk or even taxi ride from the hotel or other accommodation at which you are staying in the city.

Buses also run the risk of being crowded, particularly at busy times of the day when many flights are landing at the airport. If a bus is packed with people and you’re traveling with a large group, you could struggle to find adequate seating and luggage space, which can be a hassle. This could require even having to take two buses if you have a particularly sizable travel group.

But a major perk of using a bus for the ride is that it’s the cheapest option for getting into the center of Istanbul. Depending on which bus company you use and where you’re heading, the cost could be less than 25 Turkish lira and likely no more expensive than 45 Turkish lira. If you’re trying to save money on your trip, then taking the bus is likely your best option.

You don’t have to worry about buying a pass for the bus before you get on your flight to Istanbul. Instead, once you’re at the airport bus station you will be able to decide between buying one of three types of travel cards: a five-ride pass known as a BeşGeç for 23 Turkish lira, a 10-ride pass known as an OnGeç for 40 Turkish lira, or a Istanbulkart for 6 Turkish lira that you can keep recharging by adding new funds to it. If you only intend on taking one bus ride, from the airport to the city, during your time in Istanbul then the Istanbulkart makes the most financial sense — and you could always add more cash to it for any other future bus rides. But if you know you’ll be taking at least 10 rides by bus during your vacation then you might want to consider buying an OnGeç because that might be the most cost-effective choice.

Taking a taxi from the airport to the city center

A simple way to make the one-way journey from New Istanbul Airport to city center is by using a taxi. Once you’ve landed and you have cleared passport control and also obtained your luggage, look for signs in the airport directing you to the taxi pickup area.

Taxis are divided into three categories ranging from cheapest to most expensive: Type C (yellow economy), type D (blue comfort) and type E (black premium). The cost of an economy ride to Istanbul should be about 250 Turkish lira, but you can expect the ride to be pricier with the other options in exchange for the improved level of comfort and service you will receive.

The average journey time between the airport and city center can fluctuate between 45 minutes and 60 minutes. You can expect that it will take more time during period of peak traffic such as rush hour, whereas the journey should be much speedier at quiet times such as late at night.

There is no legal requirement that you should tip your taxi driver at the end of the journey, and the fare should reflect all of the fees for the ride. However, if you were provided with a safe, smooth and fast ride to your accommodation then you should consider rewarding the driver with a tip of several Turkish lira. That’s why it’s always a good idea to have some loose change before you get in the taxi. By contrast, if you believe that you received a very unsafe taxi ride to your hotel or other destination then it’s perfectly acceptable to not give your driver a tip.

You should also never accept a taxi ride from anyone who approaches you inside the airport terminal and promises to give you a cheaper and faster journey than the taxis which are waiting in the official pickup area. That’s because these drivers tend to be unlicensed and unauthorized, and you are taking a major risk by riding with them. In the unfortunate event that the taxi gets into an accident while you’re in it, the driver is unlikely to have insurance that could be used to cover any medical costs or other expenses that you might incur as a result of the accident.

Renting a car from the airport to the city center

A third option is to rent a car and drive yourself from the airport to the center of Istanbul, or wherever else you are staying in Turkey. This approach is the one that gives you the most privacy and security because the only people in the car will be you and any traveling companions, and your luggage will be safely secured in the trunk of the vehicle.

Renting a car will be more expensive than taking a bus or a taxi, as you’ll have to pay for the vehicle, insurance, and gas during the time that you have it. The exact cost of the vehicle will depend on the size, which will be based on how many people are in your group. For example, the cost of a typical passenger car will be lower than hiring a car that can sit six or more people.

You can contact international rental car companies in advance to have your preferred car booked before you even get on your flight. Or you can land at the airport and then approach a rental car kiosk in the terminal after you clear passport control and retrieve your luggage. Just note that you might have a reduced inventory of cars to choose from if you wait until after the flight, compared to a bigger selection of vehicles if you book your rental car in advance.

Driving your own rental car can also be good for your independence during your stay in the country, because you’ll be able to make your own schedule for visiting landmarks and doing any other activities. However, you might not feel like exerting the energy of driving while on vacation and it can be a hassle having to deal with traffic when you are trying to unwind. You’ll also be responsible for navigating roads in a potentially unfamiliar country, whereas if you rely on taxis and buses to get around then you can just sit back and relax during those journeys.

Explore Istanbul! Get inspired by recommended places to go and things to do